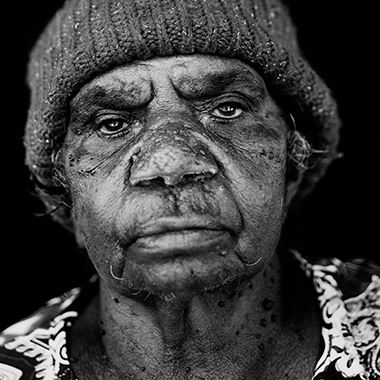 “I came back to do painting in my side [region] and even taught the others to paint. My auntie showed me how to paint and … which part of the Country I should do- only my area and my stories on my side… From there I never stop painting, and first when I started I did so many, lots and lots of painting ... and so we taught each other and everybody else is doing it now.

Wangka is storytelling – like a drawing, putting something on the canvas. Painting it, but old people used to tell stories on the sand, with fingertips… They draw it in the sand like they do on a canvas. [I paint] my own [stories], where I came from, where my parents used to take me, where my grandparents area [was], where we used to hunt and go place to place, camping with my parents and grandparents.”

Kumpaya is a Manyjilyjarra woman, respected law woman and cultural leader, born in the 1940s close to Kiwirrkura, a rockhole located in the Gibson Desert and to the south west of Lake McKay. Her brothers include the renowned artists Charlie Wallabi (Walapayi), Helicopter and Patrick Tjungurrayi, all of whom she has outlived. In her youth, Kumpaya grew up in the area surrounding Kiwirrkura, and continued to live a pujiman (traditional, desert dwelling) lifestyle into adulthood; “When I was a young girl, I walked everywhere, travelling along the Canning Stock Route. I walked north and west, around Wana warla (lake). I grew up around there, going right around that Country and all the way back to Kunawarritji.” (Kumpaya Girgirba)

Kumpaya intentionally avoided the European drovers that travelled along the Canning Stock Route, but eventually she, her husband, three children and the extended family group with whom she was travelling encountered surveyor Len Beadell in 1963. He was grading roads through the Western Desert for the Woomera Missile Testing Range. “That whitefella had fruit, flour and tucker... He gave all the little kids fruit [and they] made the biggest waru (fire)... and cooked it. When they came back… it had cooked away to nothing, there was nothing there to eat.” (Kumpaya Girgirba)

Len Beadell notified staff at Jigalong Mission of their whereabouts, and consequently they were tracked and persuaded to relocate to the mission. There they rejoined many relatives that had already moved in from the desert. After living for a time at the mission, Kumpaya worked on several pastoral stations throughout the Pilbara, washing clothes and making damper (a type of flat bread). In 1982, during the ‘Return to Country’ movement, she relocated with her family to Parnngurr Aboriginal community, where she continues to live today with her children and grandchildren.

Kumpaya is an extraordinary teacher and orator, with particular skill in gathering artists together for large collaborative projects. She primarily paints her ngurra (home Country, camp), along the middle section of the Canning Stock Route, and between Punmu Aboriginal community and Kiwirrkura, more than 500 kilometres eastward. Kumpaya learned how to paint and weave baskets while visiting family in Balgo, Fitzroy Crossing and Patjarr, and is credited with introducing these skills to Martu people. Kumpaya’s work has been exhibited widely across Australia and internationally, and acquired by the National Museum of Australia.