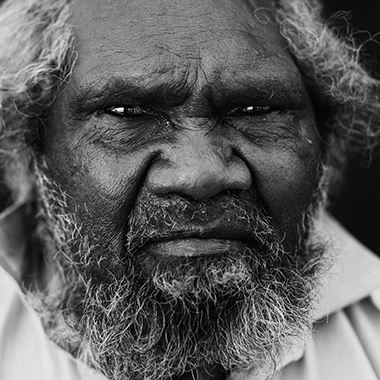 Yunkurra is a Putijarra man and senior custodian of the area surrounding Kumpupirntily (Lake Disappointment), at the southern end of Martu Country. He was born in the early 1940’s at Palatji (Palarji, Weld Springs, Canning Stock Route Well 9), and is the eldest brother of fellow Martumili Artist Miriam Atkins. Yunkurra grew up around Wiluna, and narrowly avoided being taken away by missionaries as a child. Subsequently he grew up with his elders, learning about culture and Country in his traditional lands, including Kumpupirntily, Kupayura (Savory Creek) and Jilukurru (Killagurra Springs, Canning Stock Route Well 17).

Yunkurra lived a pujiman (traditional, desert dwelling) lifestyle on his “Country, good Country... We used to stop there [and] go hunting. No road then, we walking around. No car, only camels” (Yukurra Billy Atkins). Eventually, as a ‘young fella’ he, like most other Martu at the time, began working on pastoral stations around the Pilbara, ‘mustering bullock, sheep too.’ In later life Yunkurra relocated to Jigalong Aboriginal community, closer to his home Country.

Yunkurra began painting and carving independently in the early 2000s, earlier than most Martu artists. He has played a central role in the development of painting practice in the Martu communities, and as a senior artist and creative innovator he has made works in many mediums. As an individual Yunkurra was instrumental in the establishment of Martumili Artists.

Yunkurra’s Country encompasses some of the most sacred and dangerous sites in the Western Desert; Kumpupirntily and Jilukurru. The Jukurrpa (Dreaming) stories and beings associated with these sites, including the ancestral Ngayurnangalku (cannibal beings) and Wati Kujarra (Two Goanna Men), form the subject for the majority of Yunkurra’s copious body of work. An unashamedly political artist, Yunkurra has used his work as a platform to staunchly oppose the development of mining interests in the Kumpupirntily area, declaring “Ngayurnangalku still there. They’re still alive. Don't go, keep away! I been block him, tell all the miners to keep away. Cannibal gonna come out of the lake, kill you, knock you on the head and have a feed. If they dig him up, anybody, blackfella, whitefella, they’ll get killed! They’ll have a good feed!” (Yunkurra Billy Atkins).

Yunkurra is known for his distinctive imagery, melding a naive Western style with impossibly disorienting multiple perspectives to explore the simultaneous beauty and danger of his Country, rich with Jukurrpa (Dreaming) narratives and beings. Yunkurra's work was selected for the 2003 and 2017 Telstra National Aboriginal and Torres Strait Islander Art Awards, and in 2017 he was the recipient of the Hedland Art Award. He has held regular solo exhibitions, and his work has been acquired by The National Gallery of Australia. Yunkurra's collaborative animation, Cannibal Story, has also screened in a number of highly celebrated film festivals and screen events around the globe.