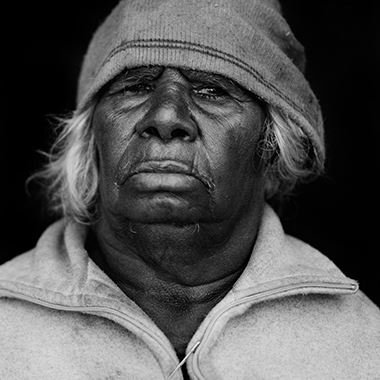 Mulyatingki is a Manyjilyjarra woman, born in the early 1940’s at Nyinyiri, a small soak yulparirra (south) of Juntu-juntu (Canning Stock Route Well 30). She is the middle sister of senior Martumili Artists Nyanjilpayi (Ngarnjapayi) Nancy Chapman and Mayiwalku (Maywokka) May Chapman. Her family’s Country extends across the Punmu, Pangkapirni (Bungabindi Well), Kunawarritji (Canning Stock Route Well 33) and Karlamilyi (Rudall River) regions. Mulyatingki grew up in Karlamilyi, but following the death of her parents, she and her sisters travelled alone in the desert between Punmu and Kunawarritji for a time, occasionally meeting and travelling with other family groups.

The young sisters had travelled south into the Karlamilyi (Rudall River) region when they first encountered whitefellas. They saw a plane flying overhead and, petrified, hid under spinifex grass until the plane had passed. Subsequent to the construction of the Canning Stock Route in 1910, the family increasingly came into contact with Europeans and Martu working as cattle drovers along the route. Gradually men from Mulyatingki’s family began to work seasonally at stations around Jigalong, but as a family group they remained living in the desert long after most Martu had moved to Jigalong Mission. Finally, in 1966, following a prolonged and severe drought, Mulyatingki and her sisters decided to walk to Balfour Downs, where they were collected by Jigalong Mission staff. At the mission, Mulyatingki was given the whitefella name "Jeannie." She lived there for many years before moving with her three children and sister Nyanjilpayi to Punmu Aboriginal community in 1982. Today Mulyatingki lives between Punmu and Port Hedland.

Mulyatingki was one of Martumili’s pioneering artists. She has developed a strong reputation for her paintings, often comprised of a bold, gestural compositional base overlayed with dots and smaller brushstrokes that seem to vibrate with energy and movement. Mulyatingki’s artworks depict her ngurra (home Country, camp); the Country she walked as a young woman, its animals, plants, waterholes and associated Jukurrpa (Dreaming) narratives. Her work has been exhibited widely across Australia and internationally, and is part of collections at the National Museum of Australia, the National Gallery of Victoria, and the Royal Collection of Her Royal Highness Queen Elizabeth II.