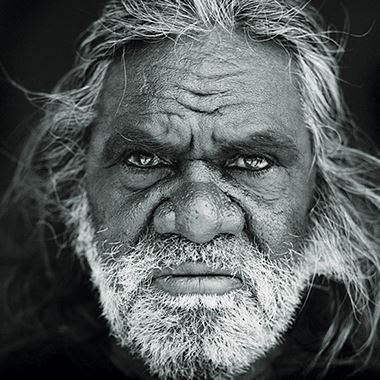 “Long ago we were living [a pujiman lifestyle]. Our people took us about and grew us up. We stayed around in the north and grew up around Punmu… and along the lake [Nyayartakujarra, Lake Dora] to Karlamilyi. We would [hunt] animals… eat kalaru (salt bush, samphire) seeds, [witchetty] grubs… [and] minta (botanical gum).

We would see aeroplanes, then we would run and keep quiet in the bushes. We didn’t know what it was. We had never seen a whiteman… We stayed there, where there were no whitemen. We didn’t see any motorcars. Nothing… Then Aborigines and whitemen got us and took us to Jigalong.”

Muuki was born around 1945 at Wayinkurangu, a soak located within the Percival Lakes region of the Great Sandy Desert. He is the eldest brother of fellow Martumili Artists Wokka Taylor and Ngalangka Nola Taylor. In his youth Muuki’s family travelled hundreds of kilometres on foot, from the northern boundary of the Martu homelands through to Parrngurr, at the southern end of the Karlamily (Rudall River) region. They continued to live a pujiman (traditional, desert dweliing) lifestyle until being collected from Balfour Downs Station and taken to Jigalong Mission in the 1960s. They were one of the last Martu families to leave the desert.

Muuki is a highly respected cultural leader, and is often called upon as an authority by other artists. In addition to painting with Martumili Artists, Muuki works as a senior cultural advisor for local Martu ranger group, Kanyirninpa Jukurrpa, where he provides invaluable advice and guidance.

Muuki paints his ngurra (home Country, camp) in the north of Martu Country, with a particular focus on Kulyakartu; flat, grass Country close to the Percival Lakes. He spent much time in this area in his youth, and has incredibly in depth knowledge of its resources, physical elements, seasonal life cycles and Jukurrpa (Dreaming) narratives. His works are encyclopaedic, detailing all aspects of Country from vanished roads to living water sources embedded within a subtle patina composed of hovering dots and brushstrokes. Muuki’s work has been exhibited widely across Australia and internationally, and acquired by the National Museum of Australia.