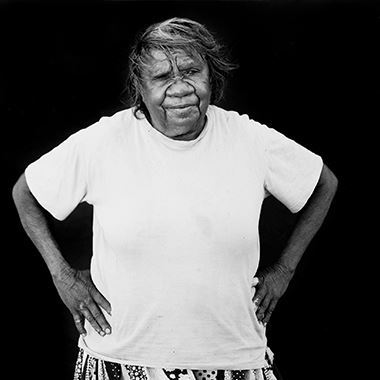 [We had been living in Jarntinti Country for a time with Wokka's family] when we walk[ed] right up to Jigalong. We had already met up with [sisters] Mulyatingki, Nyanjilpayi and Mayiwalku, their two little brothers and their mummy. We been come through Yandicoogee, Stock River. Nobody been pick us up. We been walking; me and my brother Minyawe. My mummy and daddy were gone then. We been passing through Oakover River when whitefellas, women and man picked us up in a cattle truck, Christian mob. That whitefella, he from Kimberley. He been give us flour, he been cook plenty flour for us. We been tell him no good! We were bushmen people you know? Can’t have it [processed flour]!

They drove us all the way to Balfour Downs, where we stayed for one night. From Balfour Downs we got picked up in the Jigalong truck. When we got there to Jigalong I saw Wokka again. [He was] still young fella. That’s when he became my nyupa. He’s been my nyupa since then, only one, good fella. We started working, mustering work. Together we went to Roy Hill Station. We worked there a long time together, but we finished when all the sheep died. No water. We went back home to Nullagine. Then we went to Maralinga Station, we worked there too. Wokka been ride a horse, stockman Wokka. I been do the cleaning up in house and mustering up the sheep.

We worked for many years on stations, too much time! [Eventually] we went to Strelley, everybody had their family there. We were there with Don Mcleod mob. I been stay there long time. We came down to Parnngurr after, staying in Parnngurr one way."

Kanu was a Warnman born in the early 1940’s, and the younger sister of Minyawe Miller, highly regarded senior Martumili Artist. As a young woman, she and her family travelled extensively in the Karlamilyi (Rudall River) and Kulyakartu regions, from the heart of Martu Country to its north eastern boundary.

By the 1960’s the last of the Western Desert pujimanpa (desert dwellers) had relocated to Jigalong, Marble Bar, Nullagine and Port Hedland, where they were living and working on missions and pastoral stations. Following a prolonged and severe drought, Kanu and her family collectively came to the decision to walk in from the desert. After travelling hundreds of kilometres on foot they were finally picked up by a truck driver they encountered at Oakover River and who drove them to Balfour Downs, where they were collected by Jigalong Mission staff.

At Jigalong Kanu married Wokka Taylor; the pair were inseparable through to her passing in 2019. From Jigalong the couple lived and worked together on several cattle stations throughout the Pilbara. Eventually, Kanu and Wokka relocated with their family to Parnngurr Aboriginal community as foundational community members during the ‘Return to Country’ movement of the 1980’s.

Kanu’s artworks depict her ngurra (home Country, camp), the Country she walked as a young woman; its animals, plants, waterholes and associated Jukurrpa (Dreaming) narratives. She was especially adept at portraying the fauna of her Country through its cyclical seasonal changes. Kanu’s work has been exhibited since the inception of MMA in 2006 in galleries throughout Australia, in Singapore and the USA, and acquired by the National Museum of Australia.