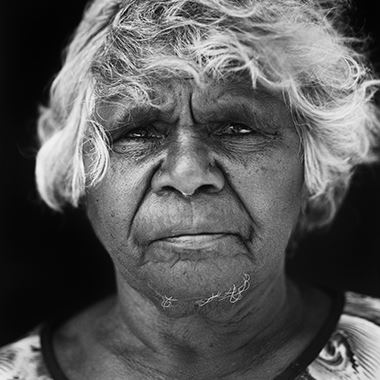 “I been born [around] Karanyal and Martilirri (Canning Stock Route Well 22) in the parna (ground), only claypan. My jamu (grandfather) [was also] Jakayu [Biljabu's] father, my father's daddy. My mummy born long way, near to Wikirri (Midway Well) area. My father born Pitu (Separation Well). I’m biggest one [I was the eldest of five siblings]; me, Neil, Ivy, Gladys, then Caroline. My sister Gladys been born Wantili, Ivy born Georgia Bore (Pitarny), Caroline been born in Jigalong [Mission]. We walked around together [as we were] growing up.”

[As a child, Ngamaru walked around with her family, living a pujiman (traditional, desert dwelling) lifestyle. In 1963 Ngamaru saw a whitefella for the first time near Wiirnukurrujunu rockhole; surveyor Len Beadell grading a road across the desert as part of a military weapons testing program. Shortly after this meeting Ngamaru, along with the other 28 Martu she had been travelling with, was tracked and pursued up by the Native Welfare Department. The group was eventually persuaded to move to Jigalong mission to join their relatives that had already moved in from the desert.]

“They been chase us, long way - me, Ivy, and Kuru (Gladys) ran away with Mitchell and Teddy Biljabu. Kumpaya, Bugai and my mother ran away quick too. Landrover he been pick us up for Parngurr, all the lot, [driving on the] track for Jigalong. Family all coming in. I been come for first time [it was my first time in a vehicle]. I was naked one, put a blanket for kurnta (shame). I been living there in Jigalong with my mummy and family. I been working in the dining hall, making bread for kid. I been meet my nyupa (spouse), Mr Booth, and had a son, Ned Booth.”

Ngamaru was born at Martilirri (Well 22 on the Canning Stock Route), the eldest of four siblings. Her mother came from the area around Wikirri and her father from Pitu. As a child Ngamaru lived a pujiman lifestyle, and walked around with her family, moving from water source to water source dependent on the seasonal rain cycles. They often travelled with their extended relatives, Bugai Whyoulter and Jakayu Biljabu’s families.

When Ngamaru was a teenager, her family and their travelling companions were tracked by Native Patrol Officers and staff from the Jigalong Mission. The group was persuaded to move to Jigalong Mission, where they rejoined the many family members that had already moved in from the desert. At the mission, Ngamaru’s sister and some of the Biljabu family were sent to school, but Ngamaru went to work making bread.

From Jigalong Ngamaru moved to Strelley Community, where she met her husband, Joshua Booth. Together with their children they later moved to Warralong and then Punmu Aboriginal Communities before settling in Parnngurr Aboriginal community (Cotton Creek), where Ngamaru continues to live today.

Ngamaru has painted with Martumili since its inception in 2006. She has frequently painted with senior artists and relatives Mitutu Mabel Wakarta (dec.) and Kumpaya Girgaba. Ngamaru is known for the beautifully complex compositional structures and intricate patterning in her work, through which she very often explores the practice of fire burning in her Country and its related Martu cyclical seasonal changes. Ngamaru’s work has been exhibited in galleries internationally and throughout Australia, and acquired by the National Museum of Australia. She was selected in 2019 for the prestigious John Stringer Art Prize exhibition.