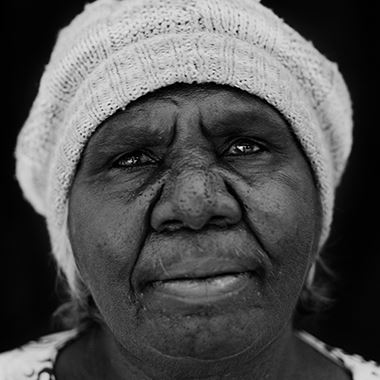 Ngalangka was born at Wirrinyalkujarra, north east of Punmu. Her mother was Warnman and Ngaanyatjarra and her father was a Ngaanyatjarra man. When Ngalangka was a child, her family walked in the Percival Lakes area surrounding Wirnpa and Kirriwirri soaks. Here they often met with Martu families coming from the north and west. Although her family knew about whitefellas and station and mission life, Ngalangka’s father was determined to remain living in the desert.

During a journey north to see Ngalangka’s two sisters in the Ngurarra (Joanna Springs) area, her father became critically ill. As the desert population continued to decrease, Ngalangka's family met with the Biljabu family. Together they lived in the Karlamilyi (Rudall River) region for a time. When Ngalangka’s father died, her family decided to move to Jigalong Mission, and in 1965 they walked into Balfour Downs Station. There they were picked up by Jigalong Mission staff. Ngalangka, like many others, felt a profound and long lasting sadness after having to leave her Country and adjust to life in a mission.

In Jigalong she began schooling, and continued her studies in Port Hedland. Subsequently Ngalangka moved to Strelley Aboriginal community, and then again to Jigalong. In Jigalong she was employed as a health worker, and here she remained until she married Nyarrie Morgan. Together Ngalangka and Nyarrie moved to Parnngurr Aboriginal community, where they continue to live as respected elders and community leaders with their children and grandchildren.

Ngalangka started painting with Martumili Artists in both oils and acrylics in 2000 and began weaving baskets in 2001. As a cultural advisor and translator she has been instrumental in the establishment and development of the group, and continues to tirelessly support Martu artists.