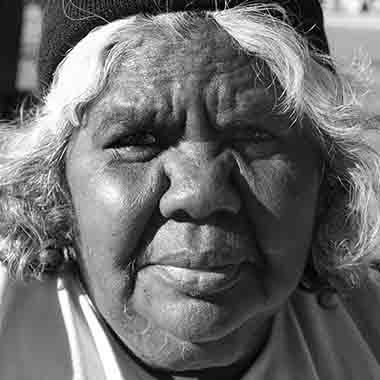 “I grew up around these salt lakes [Percival Lakes] with all the families; [my sister] Yuwali’s mob, all together. Too salty to drink, so [we would] get fresh water from Yimiri, a yinta (permanent spring) in the lake."

Ngarga is a Manyjilyjarra woman, born in the isolated Percival Lakes region of the Great Sandy Desert in the mid 1950s. She grew up primarily around Yimiri and Kurturarra soaks. She and her young siblings would stay close to the major water sources while their parents went out hunting. During the rainy season her extended family group would separate into smaller units, and when it was hot they would come back together at the permanent water source of Yimiri.

As a young girl Ngarga lived nomadically in this region with her family group, composed unusually of only female adults and children; the men that had been travelling with the group had either died or moved away. While most Martu had by this time either moved in to pastoral stations or missions, or at the very least encountered whitefellas as they travelled along the Canning Stock Route, the extremely remote location of Ngarga’s group had prevented such interactions. Their first contact with Europeans occurred in 1964, when the government sought to clear all remainng pujiman (traditional, desert dwelling) Aboriginals from an extremely large area destined for military weapons testing. At that time they were tracked with vehicles and an aeroplane. Once sighted prior to the testing operation, her family group was dramatically pursued for several weeks by Native Patrol Officer Walter McDowell for many weeks. This extraordinary story has since been documented in the award winning book, ‘Cleared Out: First Contact in the Western Desert’ (Co-authored with Sue Davenport and Peter Johnson, Aboriginal Studies Press, 2005) and film, ‘Contact’ (2009, Contact Films).

Once the group was finally tracked, they were persuaded to move to Jigalong Mission to join family there. They were one of the last families to move in from the desert. Ngarga schooled at the mission, then moved to newley Aboriginal owned Strelley community. She later returned to Jigalong, where she met her husband and fellow Martumili Artist, Yanjimi Peter Rowlands. Together they remained in Jigalong for a time, raising their children until they were school aged. The family relocated to Parnngurr Aboriginal Community during the 1980s ‘Return to Country’ movement. Today Ngarga and Yanjimi live between Newman, Port Hedland, and Parrngurr.

Ngarga is a talented weaver and painter. Her works depict her ngurra (home Country, camp), the Percival Lakes region, and its associated Jukurrpa (Dreaming). The area is dominated by a series of striking salt lakes, extending across a distance of 350km, and was formed by Wirnpa, one of the most powerful of the ancestral jila (snake) men and the last to travel the desert during the Jukurrpa. Ngarga’s work has been exhibited widely across Australia and internationally, and her collaborative works acquired by the National Museum of Australia.