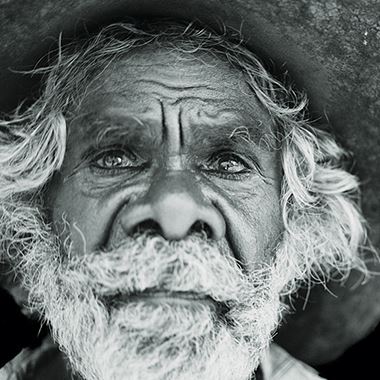 Wokka was born in the late 1940s at Kaljali waterhole in the Kulyakartu area; flat, grass Country in the far north of the Martu homelands and close to the Percival Lakes region. He is the middle brother to fellow Martumili Artists Muuki Taylor and Ngalangka Nola Taylor. Both Muuki and Wokka are highly regarded cultural leaders, and Ngalangka a skilled translator and cultural advisor.

In his youth Wokka’s family seasonally travelled between the Kulyakartu and Percival Lakes regions depending on the availability of water and the corresponding cycles of plant and animal life on which hunting and gathering bush tucker was reliant. Generally they lived in Kulyakartu during the wet season, when its' claypans filled with rain, and the Percival Lakes during the dry season, when they could rely on the area’s many permanent soaks. They continued to live a pujiman (traditional, desert dwelling) lifestyle until being collected from Balfour Downs Station and taken to Jigalong Mission in the 1960s. They were one of the last Martu families to leave the desert.

At Jigalong Wokka married Kanu (Karnu) Nancy Taylor (dec.); the pair were inseparable through to her passing in 2019. From Jigalong the couple lived and worked together on several cattle stations throughout the Pilbara. Eventually they relocated with their family to Parnngurr Aboriginal community as foundational community members during the ‘Return to Country’ movement of the 1980’s. Wokka continues to live in Parnngurr today.

Wokka paints his ngurra (home Country, camp), the Country he walked as a young man; its animals, plants, waterholes and associated Jukurrpa (Dreaming) narratives. His work has been exhibited widely across Australia.